The headline reads: Lil’wat artist’s work to be displayed prominently in Pemberton

The subhead: Mayor Richman hopes project will stimulate conversation about the ‘shared land that we live on’

The story, by Joel Barde, in the Pique, is below.

Conversation can only happen when thoughtful people are willing to start the dialogue. I love and appreciate the honesty this has launched with – these are tough conversations.

In the spirit of reconciliation and ongoing efforts to enhance the downtown core, the Village of Pemberton (VOP) will display the artwork of Lil’wat Nation artist Levi Nelson on banners along Portage Road.

The brightly coloured pieces—entitled Medicine Man Summoning the Spirits and Creatures of Land & Water—were created in the Woodland Cree style, an art movement originated by Ojibwe artist Norval Morrisseau in eastern Canada. They will include the Ucwalmícwts place name for the Pemberton area: “Nkwukwma.”

According to the Village, workers will begin installing the banners on Wednesday, Jan. 2. And in the spring, the VOP will incorporate more of Nelson’s work, installing several banner wraps on utility boxes.

“He’s very, very talented,” said Richman. “Just the beautification of having (Nelson’s) work in the Village is going to be great.”

Richman added that he hopes the prominently displayed artwork will help stimulate conversation and open up a dialogue on “the shared land that we live on.”

That message resonates with Nelson, who is currently in his third year at the Emily Carr University of Art + Design and recently won the coveted IDEA Art Award, landing his artwork on the walls of Vancouver General Hospital and UBC Hospital.

He said he submitted eight paintings for the project—including two that combine cowboy and Lil’wat Nation iconography and were created specifically for the project—and was then forced to reflect when the selection committee chose the Woodland-Cree style paintings.

“I was a little apprehensive about it, and I wasn’t sure how people would take it,” said Nelson, noting that perhaps there might be an expectation that the art should more closely reflect the artistic tradition of Lil’wat Nation.

In the end, Nelson discussed the issue with his professors at Emily Carr, who shared that today’s Aboriginal art scene is increasingly cross-cultural.

“You’ll have people on the Northwest Coast going to powwows and dancing in women’s fancy dance style, or you’ll have artists like me, borrowing and practicing from eastern Canadian art,” said Nelson.

“I think that is where we are at in contemporary Aboriginal art … the cross-cultural practicing of each other’s expressions.”

In the end, the artwork on the banners does reflect the Pemberton area, said Nelson, noting that the area looked far different before European settlement.

“So Pemberton and Mount Currie (was) basically this marshland,” he said. “That’s what inspired me to paint Creatures of Land & Water—the moose, loons and salmon” that lived there.

Nelson said that while he has felt supported and had a positive experience with Pemberton residents growing up, he’s been troubled by “angry comments from (some) about people from Mount Currie who may have alcohol addictions and are wandering the Village or in local parks.”

The roadblocks in the ’90s “kind of divided the communities, and it’s been kind of rocky ever since,” reflected Nelson.

He sees his work as contributing to the ongoing efforts to further reconciliation between Indigenous and non-Indigenous Canadians across the country. It’s important for smaller communities like Pemberton to “open up and welcome” Indigenous communities as part of the effort, he explained.

When asked what obstacles need to be overcome to further reconciliation, Richman said that it’s important to address “ignorance” around the legacy of colonialism and residential schools.

“I know that’s a word that scares people—but it’s not meant to insult,” said Richman. “It’s meant to say that our community is still very much uninformed at times as to what our shared past is, and what some of the impacts of colonialism have been on our First Nations neighbours.

“It’s not a matter of blame. It’s a matter of acknowledging that these things were done in our country and area and they still have lasting damage in communities.”

Asked if that sentiment resonates, Nelson said he feels it is spot on.

“I hear it a lot, ‘well, why are they like that? Like they get all this free money … why don’t they make their lives better?’

“It’s a lot bigger than that, there is a large percentage of Aboriginal people who are dealing with post-traumatic stress that’s been handed down from generation to generation by way of alcoholism and even abuse.”

Nelson said that he hopes that his artwork will serve as an “optical representation” of relationship building—which he sees as vital and still in its early days. 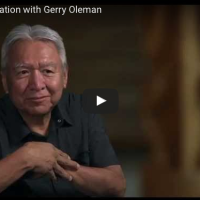 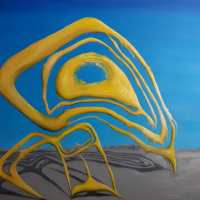